Bicycling is an adventure, a thrill, and a freeing experience that non-cyclists can only imagine. It's more than that, though—cycling is a way to get stronger; to get healthier; to fight back as your body battles illness. Brave cyclists have battled a variety of illnesses, helped along by their dedication (long-term or newly found) to cycling. So as you go out and face illness, or frustrations, or just a boring day at work, know that cycling awaits, offering you freedom, excitement and health. 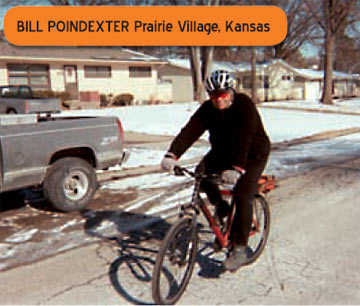 BILL POINDEXTER is a 44-year-old, self-employed executive recruiter and business broker. He lives in Prairie Village, Kansas, and credits cycling with his loss of more than 100 pounds, and his healthier lifestyle.

When did you start cycling?
I seriously started seven years ago. I always admired people who rode their bikes for transportation and fitness. I started cycling when I was seriously obese. Cycling and walking were the two safest things I could do to help me drop pounds and get back into shape.

What inspired you to start?
Bicycling has changed my life and the way I view the world. In 2000, I weighed just over 400 pounds. I suffered from anxiety, shortness of breath, high blood sugar and depression. I decided to turn my life around after looking in the mirror and realizing I would not live very long at that weight or have a very high quality of life. I went to the doctor for a physical and got some medicine for the anxiety, and then started a walking and stationary bike program. I changed my diet as well, and within five months I had lost 40 pounds. At that point, I bought a bicycle.

I started to ride the bike for transportation as well as exercise. I was car-free for two and a half years. Over that time, weight continued to come off, my anxiety decreased, I experienced no more shortness of breath, my blood sugar stabilized and I no longer needed medication!

What is a day in your bicycling life like?
Typically, in the morning, I load up my bike and ride to a local coffee shop and work a few hours. Over lunch I run a few errands, unless it is really nice, then I go for a long ride. Then, in the afternoon, I usually go for a one-to-two hour ride… sometimes more, occasionally less.

Do you recommend cycling to others? Have any taken you up on it?
I recommend cycling to anyone who is breathing. I am known as "Bicycle Bill" where I live. When people have conversations with me, their first questions generally are: "still riding your bike?" or "did you ride today?"

Many people have taken up cycling because of me, some commute, others ride for recreation, and many ask for advice about cycling. My family used to give me grief for showing up to family gatherings on my bike, grinning, sweating, having to make a quick change—and now some of them ride. The janitor of the building where I take yoga classes watched me ride to yoga and around town, so he bought a bike at a church bazaar and he has been commuting and riding for fun ever since!

What kind of bike are you currently riding?
I have two bikes both of which are front-suspension mountain bikes. My main commuting bike has a chromoly frame and the other is aluminum. Being a 260+ pound rider, I would break spokes every week or two with the amount of riding I do, so, I have wheels with heavy-gauge spokes and brass nipples. I have had zero spokes break with the wheel upgrade.

What's the best part about cycling?
Tough question. Everything! For me, on every ride, there's a time when the bike and I become one, and a euphoric sense that all in the world could be made right if everyone rode their bike comes over me. That's when I feel at peace with myself and the world. Plus it's fun!

What's the worst?
Having to ride like you're invisible, because drivers do not see or pay attention to you. I have never been hit, but have come very close many times. Also, road grime after a rain or melt is never fun (nor tasty).